There are many reasons why adult learners choose to go back to school. While many go back to earn higher wages and increase their credibility, many CSU students and alumni say their decision to return to school was because of their family.

Whether they want to earn a degree while their children are in college or complete a degree they’ve already started, the idea of establishing a legacy of education within their family is becoming more common among today’s adult learners. For the Rowland family of Karns City, Pennsylvania, this is exactly what happened. They had no idea their family would catch the education bug just a few years ago. 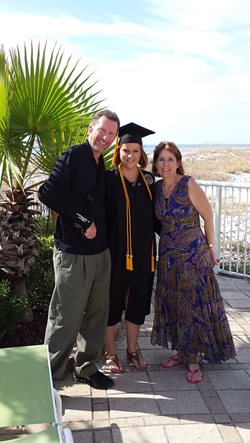 (SFU TEST) Doug Rowland decided to earn his firstbachelor’s degree in occupational safety and health in 2010. While he was earning his degree, his former employer began implementing company-wide layoffs, of which he was exempt because he was enrolled in college. After earning his degree, Doug went on to use his credentials to land and even better job as a chemical plant operator at his current company, Indspec.

Inspired by her husband’s success, Doug’s wife Tracy decided to pursue her master’s degree. “I looked around at other schools and none matched the flexibility or price of Columbia Southern University.” Tracy earned her MBA with a concentration in finance in 2014 with CSU.

“My degree has helped immensely with my career,” she said. “Since I earned my master’s degree, there have been many opportunities for promotion. Also, I decided to become a certified public accountant. My courses from CSU helped me pass the business environment and concepts portion of the CPA exam and having a master’s from CSU has given me credibility with my colleagues.”

After this achievement, another family member became interested in pursuing their education with CSU as well. Tracy and Doug’s daughter Amber graduated in 2016 with her bachelor’s degree in business administration.

At 23 years old, Amber wanted an educational option that allowed her to work full-time while earning her degree. CSU seemed like the obvious choice. All three CSU graduates attended the 2016 commencement ceremonies in Orange Beach and cheered on Amber as she walked across the stage.

Education can change your career, your life and your capabilities, and for the Rowlands, it changed the whole family.

Topics in This Article

Ready for more information about Columbia Southern University? Fill out the form here to be connected with an admissions counselor and learn more about:

Thank you for your interest

Your information has been sent and we will contact you soon.